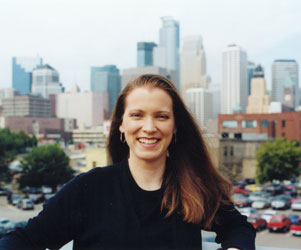 “The voice of a twenty-something adult with her perspective has rarely been heard.”
—St. Paul Pioneer Press

Abigail Garner is a writer, speaker and educator who is dedicated to a future of equality for LGBT families and communities. She speaks from her own experience of having a gay dad who came out to her when she was five years old. Bringing voice to a population of children that is often overlooked, Abigail has been featured on CNN, ABC World News Tonight, and National Public Radio. She is the author of the Lambda Literary Finalist, Families Like Mine: Children of Gay Parents Tell It Like It Is (HarperCollins, 2004).

She has a master’s degree in Organizational Leadership with a certificate in dispute resolution from Hamline University. She graduated from Wellesley College with a degree in anthropology.

“To some, Garner’s heterosexuality isn’t enough to win their respect. Criticism and personal attacks are realities in her world. After all, she is shouting from the rooftops about issues that make some people cringe. She is raising questions many people are too afraid to ask themselves.”
—Minnesota Women’s Press